What I Learned this Fortnight!
“Math.” --Christian Formhals
“I learned how to long jump in speech class” -Annie Dubler
“I learned African people don't take kindly to other people walking in their villages” - Jordan Merendino
“Mr. E thinks professional sports are rigged” -Jared Harp
“I learned that the blood drive is on February 28th” -Megan Pullem
“I learned how to make an African mask¨-Hailey Scharver
“Inequalities in Math” -Braeden Feeman
“Stay in school” - Lenee Copeland
“Radon seeps through the floor of your house.” -Tabitha Hamilton
“Snipes are real birds” -Evan Wertz
​

A video that went viral showing very emaciated looking sun bears begging for food from visitors has turned people’s heads to the zoos in Indonesia. An expert at the Sun Bear Center in Boreno said, “There seems to be a lot amiss when [with] the sun bears' behavior.” The video was captured in 2016 at the Bandung Zoo, and since then, several hundred thousand people have signed a petition for the zoo to close. Experts of animal welfare have said that the Bandung Zoo is not even the worst zoo in Indonesia. Gabriella Fredericksson noticed many things amiss with the video. First, the animals begging means they are used to being fed by visitors, which is not the proper diet for the bears. Secondly, she saw that the bears were lactating, which is a sign of unmanaged breeding, and can lead to the death of the cubs. Also, the foot pads of sun bears are very sensitive and walking on concrete breaks them open, and then causing them to get infected. The lack of shade can hurt their eyesight and lastly, too many sun bears are in the same enclosure. In the wild, sun bears are solitary animals.

Surabaya Zoo is another institution that does not care for the welfare of their animals. A giraffe was found dead with 40 pounds of plastic in it’s stomach. A lion was found tangled in wire and had strangled to death. A white tiger starved to death because he had a tongue injury that had not been operated on. Elephants have their feet shackled so they cannot walk around the enclosure. In the wild, elephants travel up to 30 miles a day and are very intelligent, social animals.

These bad conditions have a wide range of causes. The zoo makes ticket fees about 6,000 to 10,000 Indonesian rupiahs, which is 50-75 cents. That is about the cost of a nasi bungkus, a street food dish of rice on a banana leaf. When the cost of a ticket is that low, the staff cannot be trained properly, keep the premises clean, buy some enrichment items to stimulate the animals brains, and improve the small concrete enclosure. Instead of learning opportunities and conservation projects, Indonesia sees zoos as entertainment; lions, elephants and tigers are just cash cows. Zoos will even breed animals more often, because cubs attract more visitors, without even a thought of how they will feed those extra animals or where they will be placed.

Indonesia’s Ministry of Environment and Forestry said that only 4 out of the 58 registered zoo’s were “decent and appropriate.” Taking wild intelligent animals out of their natural environment and putting them in a small enclosure with barely any food, is like prison. Those beautiful creatures are like inmates, and humans are the guards. These animals are trapped, and we can help them. To help, you can sign petitions online to get them shut down and free those helpless animals. We must be their voice.

Here’s a few pick-up lines . . . just in case your someone special speaks in a foreign language ;-)

Si le verbe aimer n’existait pas, je l’aurais inventé en te voyant
“If the verb “to love” didn’t exist, I would have invented it upon seeing you”

On devrait t’arrêter pour excès de beauté sur la voie publique.
“You should be arrested for excessive beauty in public.”

Il y a tellement de soleil dans tes yeux que je bronze quand tu me regardes
“There is so much sun in your eyes that I get a tan when you look at me.”

What I Learned this Fortnight!

--“How to burn a disc.” -- Mason Coffindaffer
--“How to make corn fritters” -- Gage Belcher
--“All of the geometry” -- Sam Garber
--“A lot of presidents have Affairs. Really? You’re the president. Set an example” -- Tayah Lindsay
--“I’ve learned to choose to give blood on the day you are doing a dissection in Bio.” - Anonymous
--“Herbert Hoover made "The Star-Spangled Banner" the official national anthem in 1931.” -Josh Blauser
--“I learned the anatomy of a cat”--Kierstyn Carver
--​“I learned in Prayer Group to forgive and forget.” -Amelia Myer
--“Not to make Erika mad...” -Jared Lind
--“The cosine function.” -Matt Mansfield
--“Long division.” -Jacob Parker
--"How to write in calligraphy" -Morgan Klenk
​

Speaking in a Different Language

What I Learned this Fortnight!

Speaking in a Different Langauge

Featured below are phrases written in French and Spanish that our foreign language teachers have shared with us this month, some hold a special place in their hearts, and some simply sound very interesting!

“Todo lo puedo en Christo que me fortalece.”
Translation: “I can do all things in Christ who strengthens me.”
-Señora Harring
This quote was given to Señora Harring on a plaque by her dear friend Mrs. Chamberlain. She keeps this plaque on her desk so she sees it everyday and it reminds her of her friend.

“Dime con quién andas y te diré quién eres.”
Translation: “Tell me who you hang out with, and I will tell you who you are.”
-Señora Weaver
Señora Towner will admit that this quote might be a little cheesy, but that’s all right! Some of you may recognize this phrase—as it was taken straight out of the textbook—but Señora Towner just couldn’t choose something she liked any better than this! 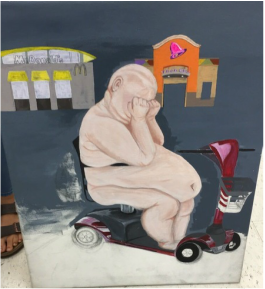 Below the Surface
By Kelsee Johnson

In advanced art Hannah McCartney has been working on a project that shows what dehumanization means to her. She named her piece “On the Threshold of Dehumanization.” This work of art is showing how people are dehumanizing by being lazy, not caring about themselves, and eating unhealthy. The American society is promoting bad lifestyles.

​Katie Carver is creating a painting that focuses on the theme of dehumanization in advanced art, taught by Mrs. Irwin. She is showing that there are different parts in our world. In this painting a girl is trying to escape from the toxic world that we live in. Katie is showing how we are dehumanizing our environment.